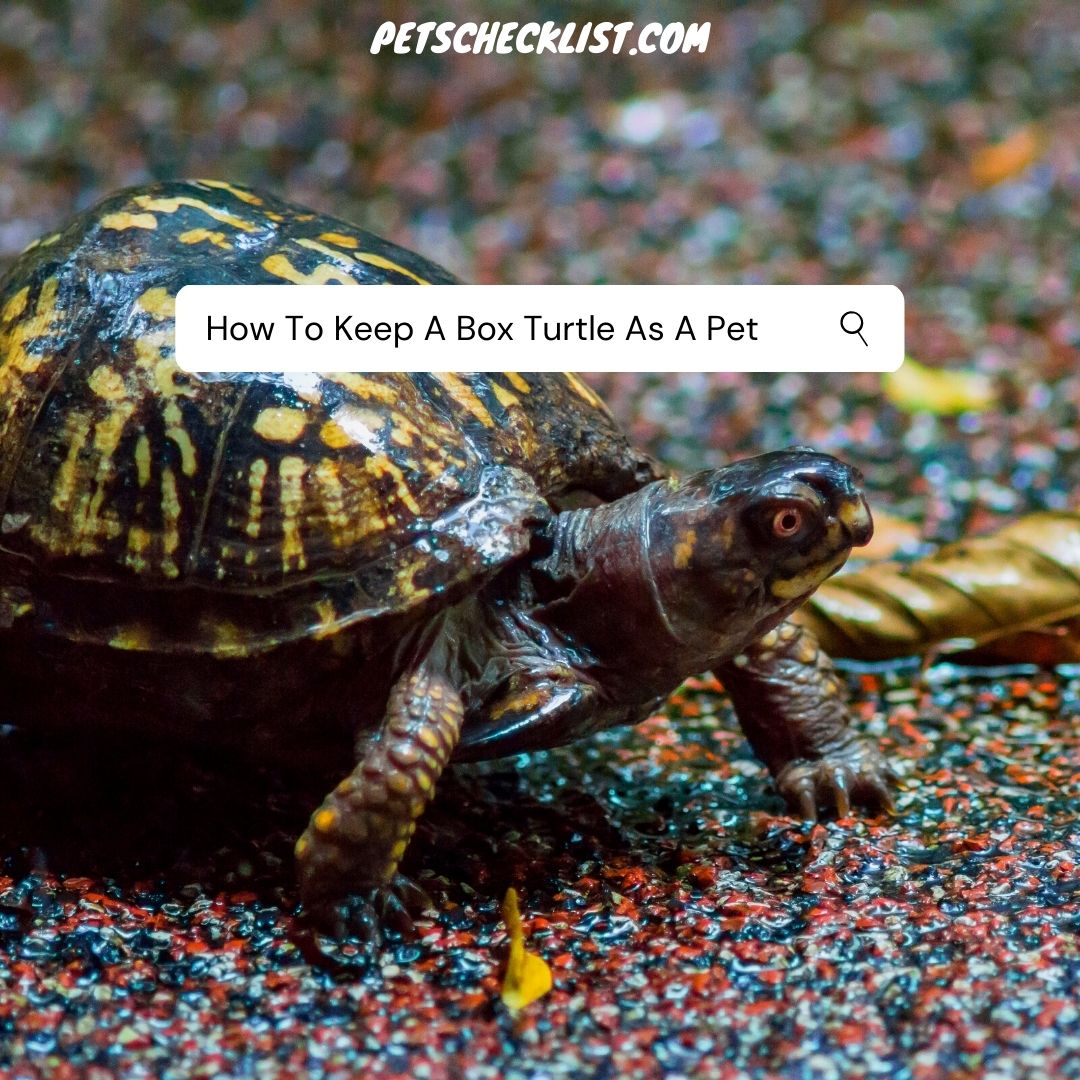 Box turtles are popular pets. They have this exotic look that caught the attention of many. Some of its species have fascinating colors and designs. To survive as a pet, they need exposure to artificial light to stay healthy as well. It is essential to know and provide them with their required diet. These are just a few of the things you need to know on how to keep a box turtle as a friendly pet.

For a typical pet that you can handle anytime, box turtles are an exception. They may be safe to pick up, but they do not like that way to bond with their owners.

Although they require lots of care coming from their owner, they are still worth keeping as these creatures can live long. Keep them happy by providing them an equally varied diet in captivity to ensure proper nutrition.

What Is A Box Turtle?

The Terrapene is a North American genus and a member of the Emydidae Family. Unlike other living species of turtles, this box one has a high-rounded upper shell or the carapace as they called. They have a flattened bottom shell or plastron with a transverse hinge.

Typical turtles have a bony bridge, except for box turtles because of their ligament connections between the carapace and plastron. Since they have too high domed shells, most of the predators think they are too large to consume as a whole. They are too tight, making them difficult to crack or open.

There are several species of box turtle, and each of them has its housing and dietary requirement. Some need high temperature, humidity, bask, and even slightly salty water. If you want to make them a companion, know that they like consistent surroundings and not fond of handling by people.

They can nip when you overhandled them, and they can carry salmonella. Thoroughly wash your hands if you have a close encounter with your pet or even touch anything in its environment.

How To Keep A Box Turtle As A Pet

Before you consider owning a box turtle, you must know their background first. These turtles are great pets once they received the proper care from their owners. It is more beneficial to know how to keep a box turtle as a pet to give them the best life they deserve.

If kept outdoors or in backyards, do it at least in one season of the year. These turtles are sensitive to the temperature of their environment. Box turtles can also hibernate in an outdoor set-up. But before you allow your pet to do such minimal activity, ensure that your pet has an overall good condition. When unhealthy box turtles hibernate, their body functions slow during the process that might result in death.

Box turtles are omnivores. They have dietary requirements as they can eat and survive on both plants and meat. When you place them outdoors, they will look for other supplements for the food that you feed them in what they see in the backyard. Fresh fruits and vegetables, low-fat meats, insects, and pinky mice are the primary foods under their nutritional diet.

For a balanced-diet, 60-80% should be vegetables, 10-20% are for fruits, and 10% are for insects. It is up to you if how to manage to give them the balanced diet they need. You can also offer commercial diets for these turtles. However, you have to supplement them with fresh foods.

During the feeding process, place the food on a plate or paver as it prevents the turtle from ingesting its substrate. If you have young box turtles, you need to feed them every 24-hours since they are still in the development process.

When they reach adulthood, you can turn every day into every other day. For assurance, consult your Vet for the appropriate proportions for your pet. Always clean the water in a shallow dish.

Common Box Turtle is a popularly known type of box turtle in which most of the North American subspecies hail. The current status is vulnerable. There are six common subspecies of these box turtles. The first one is the Florida box turtle. These subspecies are exclusively from Florida. However, you can see them also in Southern Georgia.

The second is the Eastern Box Turtle from the United States. It is also a well-known subspecies and considered as vulnerable too.

The third is Three-Toed Box Turtle that is commonly known for its three toes on its hind legs. They can cope up well in their new environment than most box turtles. Because of that, they are one of the ideal turtle box species as pets.

The fourth one is the Mexican Box Turtle which is obviously from Mexico. They have a law issue regarding export, and they are not for the pet trade.

The second to last is the Yucatan Box Turtle. These subspecies are in the Mexican state of Yucatan. They are not an officially endangered species. But the locals have rarely seen these subspecies in the past years.

This Gulfbox reptile is pretty unique. The last one is the Gulfbox originated from the Gulf of Mexico, Louisiana, and Florida.

However, they are now endangered species. These turtles came from Coahuila, Mexico.

How Do I Keep My Box Turtle Happy?

Box turtles are not expressive pets to show if they are enjoying, sad, or even depressed. So, it’s hard to tell what they feel at the moment. Keeping your pet box turtle happy means you understand their mental state and their needs. You have to give them a spacious area as their shelter.

With that, they can live their life to the fullest.

Spending time with your pet is the best way to keep them always at their best. Whenever they see you often, they tend to be comfortable with your presence as each day passes by.

Although these box turtles do not crave human affection most of the time, you can still have another way to bond with them. You can talk to them outside their shelter, feed them live foods, or even do your favorite hobby near them. If you will attempt to handle them, make sure that they are in the mood.

Carefully pick them up and place them in an area where they won’t feel threatened. While they are outside, you can clean or play with them. Allowing them to exercise is a beneficial activity to their health. If you see them enjoying your presence, pet their chin, head, and shell as long as they want you to do it.

Final Thoughts: How To Keep A Box Turtle As A Pet

Box turtles are not for everyone. Since they do not crave for human touch, they are not an ideal pet for young children. These creatures are not like a dog that can be pet, handled and forced to move fast at all times. They are sensitive and moody most of the time.

The appropriate one to own a box turtle is an adult. They know how to handle these turtles calmly and gently. When you have a child at home, make sure that they would not get near your pet. Box turtles are not toys.

Having a box turtle as a pet is quite challenging for some people. Since local pet stores do not sell these animals, you can only see them in the wild. However, several states are not allowed to adopt these creatures. You have to get a permit to keep a box turtle legally. They are wild creatures and have not been domesticated. So, what do you expect?

When planning to keep one, experts would recommend you to get a juvenile box turtle. They are obedient pets, and you can train them in the proper ways as early as possible. When keeping an adult one, it is essential to know that you have to make their new home like the wild where they used to live.

This environment can prevent stress and helps them to live longer than expected. Their life will eventually cut short due to different reasons as well. If you want accurate information, do not hesitate to consult the Vet or do your research before making this box turtle your companion.

If you love our pet turtle content, we invite you to follow us on our social media outlets for more updates!