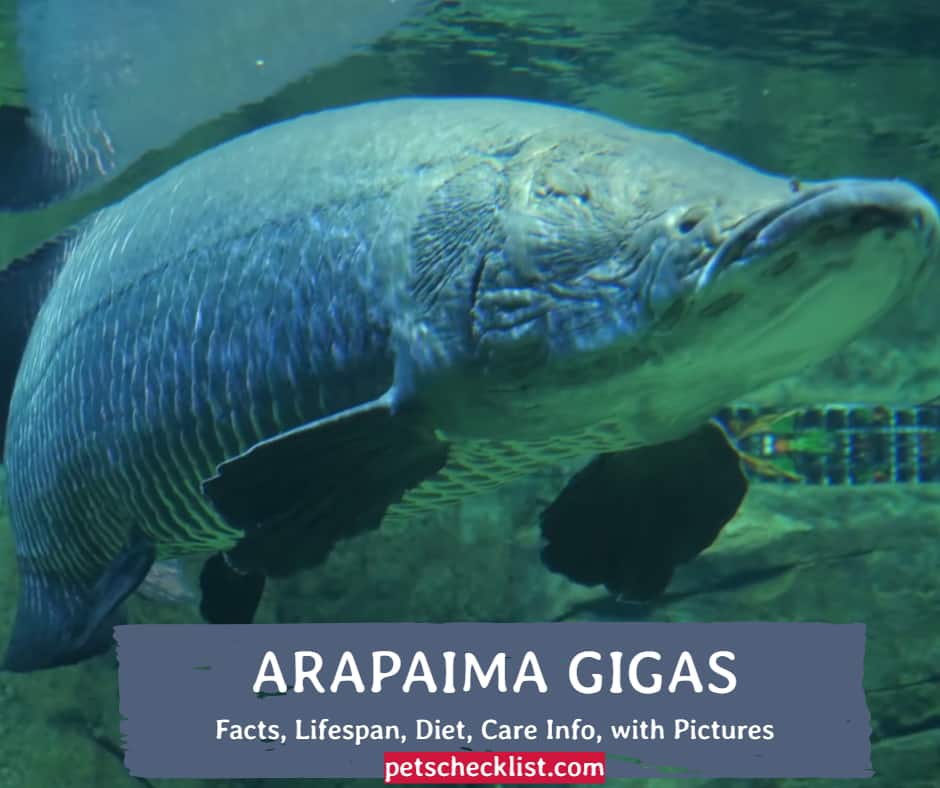 An arapaima gigas is one of the many forgotten water species that still exist today. Most people haven’t heard anything about them for several years now. They are the so-called dinosaur fish. But don’t get me wrong, they never actually lived during the Jurassic times. It is just that they have somewhat similar features as these prehistoric-huge animals had.

What is an arapaima fish?

The arapaima, also known as paiche or pirarucu, is an air-breathing fish. It roams the rivers of the rainforest of the Amazonian Basin of South America and surrounding lakes and swamps. Pirarucus are known as the world’s largest freshwater fish species that can grow up to 15 feet long, weighing up to 200 to 440 pounds.

Generally, arapaima has tapered, coppery-green heads, inverted mouths, and a scaly, uncluttered black body with a white center. The Brazilian name pirarucu comes from the Tupi language which means, redfish.

Since this creature is air-breathing fish, they have to come up for air every ten to twenty minutes due to low oxygen levels in Amazon rivers. They do not have well-functioned lungs, but they have tissues in their swim bladder that opens into the fish’s mouth and function like lungs. They produce loud noise like a cough that even the entire river hears it.

It is quite rare to consider an Arapaima gigas as pets since they are massive in size and could exhibit aggressive behavior. However, it is still possible to adopt one. You just need to prepare for all their needs. Although you can start to adopt a young arapaima gigas, they can grow enormously over time. Arapaima is very adaptable to different environmental conditions. However, they need a big-sized tank with 1000 gallons of water or more. Never forget to install powerful filters as well. They prefer live or fresh foods and a much larger live food as they grow.

Usually, you can find an arapaima in animal amusement parks. They become a majestic display in large public aquariums that gives relief from stress for lots of people. Expert aquarists are usually the caretakers of these monster fish as they have high experience handling different types of fish species.

WARNING: Before attempting to keep Arapaima gigas as pets, make sure it is legal in your country/state. We strongly discourage pet trades outside legal laws.

According to Froese and Pauly (2019), Arapaima gigas has been introduced in Malaysia, Thailand, Mexico, Cuba, China, the Philippines, and Singapore. The status of A. gigas in the wild is listed as probably established in Thailand, unknown in Malaysia, China, and the Philippines, probably not established in Singapore, and not established in Mexico and Cuba. Introduction [to Mexico] was unsuccessful due to cold climate. Large individuals were sighted in Bedok Reservoir and some ponds in eastern Singapore. Possibly also in flooded quarry pits on Pulau Ubin. (Source)

It is rare for ordinary people to bring home an arapaima gigas. For aquarium hobbyists, they are unique and highly appreciated. Because of their rapid growth and huge-size, only a limited number of people can purchase these dinosaur fish. From 1977 to 2004, around 87,000 Arapaima globally sold. The average cost of Arapaima gigas as a pet is between $90 and $120 for the smaller ones from monster fish pet shops.

Again, check first if it is legal in your country before you adopt an arapaima.

Average Lifespan of an Arapaima

How long does an arapaima live? Believe it or not, an arapaima fish can live up to 20 years in the wild. They stay with their parents for their first three months. After that, they are free to wander around the river. While in captivity, they generally have a lifespan of 15 to 20 years.  Since they are continuously growing up to 480 pounds, they are less sensitive compared to other fish species. These are some of the good things about arapaima. They can live long, and you still have many years to know your fish and discover more about them. They reach sexual maturity at four to five years old.

How do people catch arapaima?

During the ancient times, Arapaimas are taken as foods by many tribes of the Amazon. These monster fishes are endemic to the Amazon rivers and used to live there in great numbers. Due to constant hunting by the tribes and other people, its population started to decrease. In 2012, it was believed that its population dropped to 800 in the said river (Source: National Geographic).

As the arapaima must occasionally come to the surface and breathe in air, it makes them vulnerable. The fisherman will then hunt the fish and throw it, or take it into large nets. The flesh of Arapaima gigas is renowned for being very tasty, so it is highly sought after by many in South America. It has also recently been introduced to eastern Asia for fisheries.

Catching and handling this giant fish with bare hands is difficult. You have to use a strong net to get them.

Are arapaima dangerous to humans?

It is not the size that makes them dangerous, but it is about their aggressive behavior when they feel hungry. Arapaima has a broad bony head. When they feel provoked or threatened, they tend to use their short bursts of speed to attack. But during typical days, they don’t show their aggressiveness. Arapaima lacks sharp teeth. So, even though they are large-sized fish, they cannot kill humans like sharks that have extensively sharp teeth and strong jaws.

When planning to take an arapaima home, you need to research their different behaviors. You should know the proper care for them. When you know how and you are confident that you can provide them the best care, there is no reason for them to be aggressive.

Everyone would be so curious to know the diet of this dinosaur fish. Arapaima gigas hunt and eat fish in the wild rivers. Aside from that, they also eat fruits, insects, frogs, and birds they can see on the water’s surface. Whenever they eat, they use the gulp method that forms a vacuum into their mouths. Arapaima’s tongue is sharp, with bony teeth on the roof of their plates that enable them to weaken and crush their prey.

Arapaima gigas can easily hunt for food in low-oxygen zones where gill-breathing fishes slow down. They can also use short velocity speed gusts to attack potential prey, like lizards and small primates from low-hanging trees, by striking from the water’s surface .

Arapaima gigas can also eat shrimp, squid, and smelt in addition to their diets. When in captivity, they also love to munch on the gills and intestines of the usual market fish that people buy for food. So, instead of throwing these internal fish parts away after cleaning the fish, you can use them to feed your arapaimas. Just make sure it is clean and free from any harmful bacteria by washing them thoroughly.

How big can an arapaima get?

The arapaima is considered the largest freshwater fish in the world. Everyone is amazed at how big it is. It is truly one of the beautiful creatures we can find in the freshwater. But due to overfishing, they are seriously at risk of extinction.

Do’s in Caring for an Arapaima gigas

Arapaima deserves special care as well. Since it is an exotic fish to behold, more people think that this fish is unique and would sometimes identify them with dinosaurs.

Arapaimas are appropriately handled by aquarists who have experience in keeping monster fish like them. This fish is a surface or middle dweller. However, giving them a huge swimming space helps a lot in keeping them comfortable. Put floating plants inside the aquarium. They should take up only a small part of the surface of the water. A properly sealed aquarium lid is a must-have because this fish has excellent jumping skills.

Arapaima fish prosper in large ponds with aerated canopy-type tops. You can use gravel as the substrate and an aeration system. You can abundantly plat on the sides and back of the tank, but give an adequate space open for swimming. Use only moderate lighting as these fish are hard to please in terms of lighting requirements.

Keep your temperature and pH range to 75-84 °F and 6.0-6.5. Arapaima feel comfortable in the water hardness range is 5-12 dGH. Be sure to install a filter system in the aquarium that can get excess dirt over the fish. Remember to change at least 15-20% of the water every week to maintain good water condition.

When feeding the arapaima, check first the food, especially the live ones. Before you begin to feed them, you need to isolate the live food first into a container and put warm water to disinfect the bacteria or disease they might carry.

Don’ts in Caring for an Arapaima gigas

What could harm an arapaima if they are big enough to protect themselves? Indeed, arapaima is giant fish, but that doesn’t assure us that they are always in their best condition. Probably, when arapaima lives in captivity, there are sort of warnings that they are not doing well.

Do not forget to monitor them. In their aquarium, if you don’t regularly check the water’s quality or do not even bother to clean it, then chances are, your fish will get weak and sick. Failure to change15-20% of the water in the tank every week will make your arapaima vulnerable and lead to skin flukes, bacterial diseases, parasitic infections, and ichthyobodo infection. These diseases are too risky among arapaima as they eat live foods.

Do not put anything that is not thoroughly cleaned inside the fish tank. Anything that you add to your tank can bring disease and can quickly spread inside the tank. Plants, substrates, and decorations can contain bacteria. If the arapaima feels that they are not comfortable with their environment, they will likely be stress, and stress in fish can cause sudden death.

Do not overfeed them. Feeding your arapaima gigas with pellet diets can be bad for your fish. It should still have a mixture of live foods. It is important to note to clean first the live foods before giving them to the arapaima gigas as it may contain the disease and can cause death in a worst-case scenario. An unbalanced diet can result in early death.

DO NOT ever release these fishes into any other place like ponds, rivers, etc. They have a high potential of becoming a very invasive species and would disrupt the existing ecosystem of aquatic life on that body of water.

If you love Pets Checklist’s content, we invite you to follow us on our social media outlets for more updates!