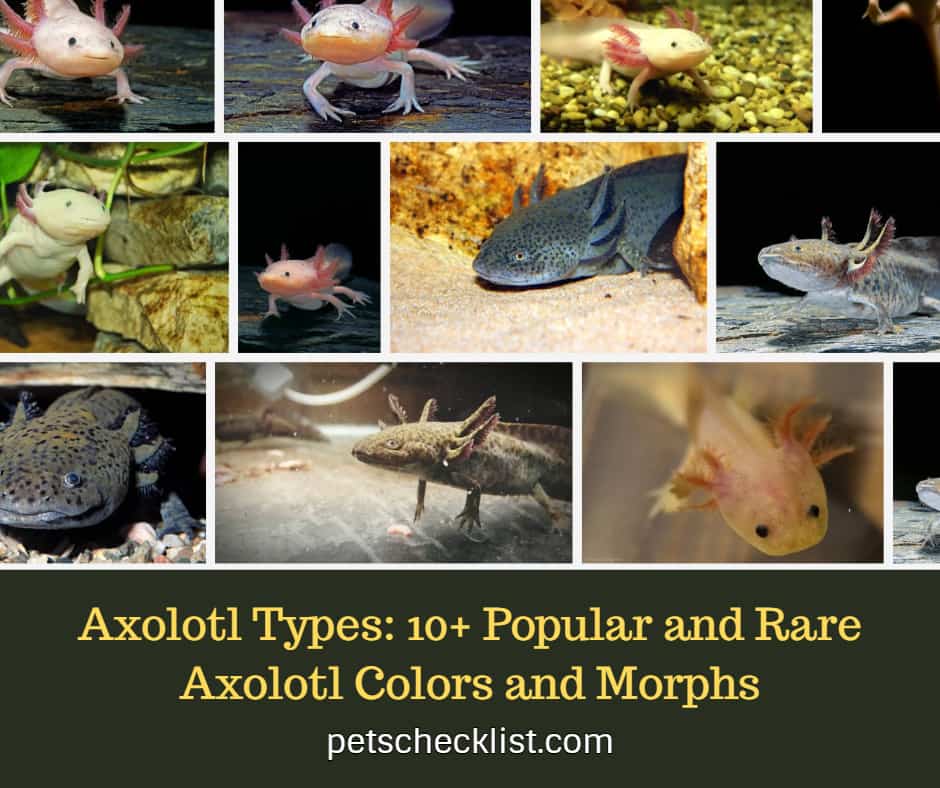 Being able to behold the different colors of the axolotl is a gift for pet owners, especially for those people who love exotic animal pets.

Axolotls are almost similar when it comes to their physical features but they may vary in their colors.

The colors of the axolotls could be a product of an accident, or it is just a natural inherited form. But regardless of their colors, axolotls are adorable creatures.

The axolotls, popularly known as the Mexican walking fish, also display a wide variety of colors and morphs. Be it green, pink, or golden, they tend to appear so fascinating for an amphibian.

These colors are rare when it comes to common animals that we adopt. Additionally, they are well known to be wonderful pets and fun to keep.

Axolotl’s color in the wild could be brown with gold specs over their body. It is a good camouflage against predators. While in captivity, you can find a fascinating color.  Under complex genetic engineering, they created axolotls under laboratory conditions.

But still, not all axolotls are created in a scientific matter. Some axolotls are through breeding. The color of axolotls depends on the pigment cells called chromatophores.

Generally, they have three varieties of cells. The melanophores have a dark pigment that can be either dark brown or black.

The xanthophores have a reddish-yellow coloring. The last one is the iridophores, where the axolotls look shinning and can glow in the dark.

The popular axolotl’s color morphs are the basic color; the wild, Leucistic or pink axolotl, White Albino, Golden, and Melanoid.

These are composed of colors black, green, gray, pale pink, white, golden, and black. They are known across the countries because they are the colors that we see in axolotls.

There are also special colors. They are the GFP axolotls, which are green and can glow in the dark, and the copper axolotls are light brown or tan.

If there are notable ones, there are also rare types. They are the chimera axolotl, mosaic axolotl, piebald axolotl, silver dalmatian or lavender axolotl, enigma axolotl, and firefly axolotl. Their colors are complex and have different levels of uniqueness.

The pink axolotl is one of the members of the salamander family. Mexican walking fish is their commonly known name. People are starting to recognize pink axolotl as a pet because aside from they being easy to care for, they are known as the most appealing color of an axolotl.

They also require low maintenance and less attention from their owners. Pink axolotls need a comfortable environment to live their life healthily. Since they are aquatic creatures, they are mostly in lakes and swamps.

It should just need to be deep to secure the Pink axolotl’s home. The tank should have a water filter to maintain the water’s cleanliness.

For colder months, the water should be kept at 15°C to 18°C (or 60°F to 65°F). The aim is to keep the axolotls as relaxed as possible. Avoid placing it in too much sunlight.

Pink axolotls are carnivorous. They can also eat small pieces of meat such as chicken or beef. They also prefer to eat shrimp and earthworms.

Young pink axolotls eat a lot for faster growth and development. When they become adults, they would still eat the same once every three days.

This white albino axolotl belongs to the basic color of the axolotl. It can be easily be identified with leucistic color. White albino lack pigmentation in their skin. That is one of the reasons why they are white.

White albinos also may get dark fingertips when nearing their sexual maturity. The white albino has two forms as white and xanthic. It is where we get to called them White Albinos.

They are truly bizarre and unique aquatic creatures. They live their best life when they are in good care of their owners or anyone responsible for ensuring their proper health condition. These creatures have an exceptional function of regeneration.

They will stay in their embryonic state and don’t develop any further. It is useful for white albinos because they have sensitive skin, and this regrowth helps them heal nicks with no scaring at all.

What color represents a classy and good-looking creature? Probably there are many, but this gold color makes it stand out.

Some golden albinos have heavy iridophores pigmentations, white, shinning patches. The yellow tinge may vary, and you may notice that other golden albinos can be pale in color in comparison to other axolotls. Golden albinos also have peach-colored gills.

You will easily identify a wild-type axolotl for it has a combination of black, brown, olive, and green colors. It has speckles of shiny gold iridophores pigments as well.

Colors may vary in a lighter or darker tint. This common type of axolotl got its name from the fact that they have natural colors.

The ultrastructure of wild-type iridophores compared with cells located in the same place in mutant axolotls. It was devoid of these chromatophores. Wild axolotls contain empty ovoids or some tiny fiber vesicles.

Another stand out color that you need to know is the copper axolotl. Instead of developing into golden or white color, they are turning into tannish and ultimately copper. This axolotl is in counties such as Germany, Australia, and the United States. It is rarely available in many other countries.

A handful of breeders has produced copper axolotl, and they share the genet of the melanoidin but have the Copper features and lack all-black pigmentation.

Curple or Copper purple axolotls are some of the names people would call them because of their purple tint.

It’s quite unusual to hear, but the silver dalmatian or lavender axolotl exists. It is even one of the rarest living axolotls. It was called lavender because of its color somewhere between purple and lavender. Aside from that, there are also unique specks all over the body which look like a dalmatian dog.

For overall research, there isn’t sufficient information available about this axolotl. Given that it is the rarest, it can only be in some places within the United States.

You may struggle to adopt this rare one as they are covered. If you fail to look for a silver dalmatian axolotl, you still have many choices of colors.

And one more thing, it is most likely to be available in the wild and not in the pet shops as they need to live in certain conditions that pet stores don’t have access to because of the limited resource.

A mesmerizing glow in the dark axolotl exists. It is a green axolotl that looks different from others. This axolotl is exceptional and remarkable.

They are designed mostly in laboratory conditions as they are used to create a solution for cancer and regeneration. Their genome structure is called GFP or Green Fluorescent

Protein. It is responsible for making the axolotl visible and glows in the dark.

This fluorescent glows in vibrant green in the UV or black-lightning. Make sure not to let this little-cute creature in too much exposure to the UV light as they might feel uncomfortable.

GFP is not a different morph. It looks life different because of the glow that is created by including GFP in fixed breeds.

GFP has become a recessive gene for axolotls and passed from one generation to the next. You can check if an axolotl is fluorescent or not by looking in the UV or blue lightning.

Mosaics are also a rare type of axolotls. They formed when two different cells combine in development. When it happened, it will result in an axolotl having two distinct phenotypes.

They are similar to Chimera axolotls but are not fully divided towards the center. This type of morph can’t be bred though. The reason for this is that mosaicism does not occur in a natural development.

Mosaic axolotls can’t artificially reproduce because, like chimeras, they are creatures of nature. Since they are the result of two junction cells, the majority of mosaics are infertile.

Whereas in a chimera, the embryo splits into two. In a mosaic morph, each cell displays phenotypes of the two cells from both parents.

Appreciating the beauty of axolotl means we are into exotic preferences. But have you seen firefly axolotls? They are one of a kind. Lloyd Strohl II first introduced it in the year 2016.

These axolotls are still not modified. However, they are formed by embryonic graphing. During Strohl’s research about the activation and distribution of melanocytes in mosaic and leucistic axolotls, he produced firefly axolotls.

He produced less than a dozen firefly axolotls, and some have a dark upper body and lighter tale while others have a brighter head and a darker tail.

This trait makes them remarkable. Some of them even have GFP or tails glow in the dark.

Chimera Axolotl came from Greek Mythology, where the mythical creature has a lion’s head, a goat’s head rising from the back, and a venomous snake in the tail.

This chimera has three animals trapped in one body. When two or more sets of genotypes form one cell, the phenomenon is called chimerism.

The chance of chimera being born and surviving is too critical.

Chimerism in axolotls is merging two eggs in making development possible. Each side develops based on the egg where it came from.

It results in a seemingly split down the middle of its body. It may even be noticed that the two sides will grow at a slightly different rate. One side can develop a little bit slower than the other.

A chimera axolotl can’t be reproduced by natural breeding. They only have a low chance of surviving.

There is a discussion that chimerism in Axolotls doesn’t exist, and they are mosaics. The color variation only happens to be torn apart.

The color variation depends on the genetic engineers that produce more and more axolotls in laboratories for experiment and research purposes for unrelated topics.

They believe it will help them improve their development through the axolotls.

As a result, there are many mutant types or morphs. Because of that, you can now find unique colors and rare color variations this day.

An enigma axolotl is a unique morph. An American hobbyist created this rare enigma axolotl. That is why they can only be found and originated from the United States.

It is a unique kind of axolotl so far. It is the only axolotl in the world with such a beautiful color combination. The base of the body is black with greenish color patterns all over the body.

The body has a black base with greenish patterns throughout the body. Enigma axolotls have a white-based, leucistic with dark, silvery green, and reflective pigment.

In general, axolotls come in different sizes, morphs, and colors. They are the cute little water salamanders that love to feast on worms, insect larvae, mollusks, small fish, and crustaceans.

Knowing that they are so alien-looking is fascinating already. But, that is easily toppled down by the fact that there are more than 15 types of unique axolotls.

If you love our content, we invite you to follow us on our social media outlets for more updates!