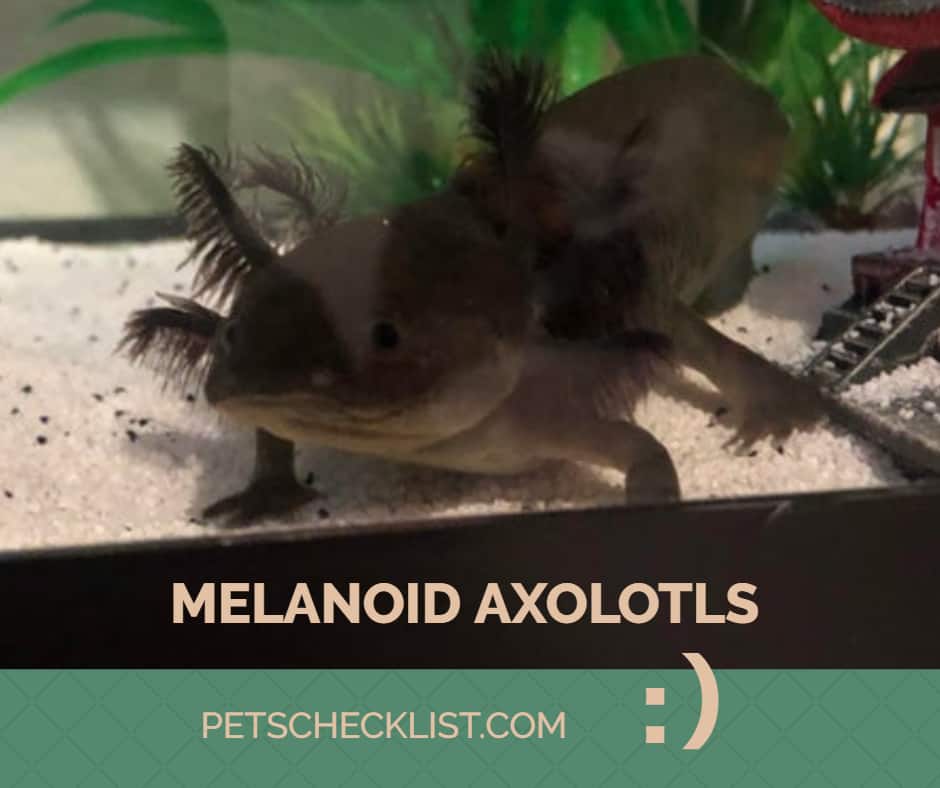 One of the most interesting facts about Axolotls is that they have different colors. Each color represent their particular genetic history and development. But we cannot deny the fact that they are adorable and fascinating to keep. For people who prefer exotics, a melanoid axolotl can be one of their choices.

Through research and studying some reading materials about axolotls, you will discover things about them that you do not usually see in other amphibians. They are generally unique in appearance, features, and behavior.

What is a melanoid axolotl?

Have you heard about melanoid axolotl? A melanoid axolotl is classified as the basic color of an axolotl. This color is often mistaken for a wild color but still have differences. They have an increased quantity of pigment in their skin that makes them have a very dark brown or black color of their body. They do not have shimmery or shiny spots in their skin, which is the main factor distinguishing them from the wild color. Since they are a smooth black in color, it also means that their gills and eyes are black.

An axolotl that is both melanoid and albino has a lower amount of xanthophores. It is caused by melanism due to the absence of melanophores. It is the reason why there have few yellow pigments that are visible on its skin.

Melanism is the enhanced development of dark-colored pigmentary melanin in the skin or hair. It is related to the process of adaptation. In axolotls, melanism is relating heritable characteristics similar to albinism. The mutation works on iridophores instead of affective melanophores.

Mutations like this have a spillover effect. It is the absence of iridophores that cause the conversion altering some xanthophores into melanophores. Because of that, melanoid axolotls expose more eumelanin. Eumelanin is a dark pigment that dominates in black and brown. Melanoid axolotls have almost no pteridines (which is a yellow color). It gives them a gray look and a bluish border under the right wavelengths.

Melanoid axolotl larvae have a lower rate of chances of living than wild type or albino axolotls. The decreased number of pteridines are essential to immune function. Melanoid axolotls are more expensive and less common on the market than other color morphs.

The black melanoids have a black or dark body and a light-colored belly. They do not have a bright ring around the pupil of an eye, and they do not have bright patches (iridophores) anywhere on their body. In cases, dark and wild type of axolotl is recognized as a black melanoid. Dark wild type has a bright ring around the pupil, and a melanoid has none.

The melanoid can be brownish or gray. This case more frequently occurs when using a flash in taking a picture. One often noticeable fact about juvenile black melanoids is that they are strongly affected by the color of where they are in. They will try to combine with it, so if you use a white substrate, the melanoid will clear up to more of a light greyish color. If you keep them on a black substrate, they are going to be completely black. The colors between white and black will make them lighter in different shades of gray.

Moving them from a container with a light substrate to one with a dark substrate is a reminder that they change from one way to another quickly. If your tank is bare ground, then the color that appears under the tank will count as the substrate color. On the outside of the tank, tape a piece of black paper to the lower part of the tank. It will make your axolotl be darker or black. When axolotl grows up, they usually turn black regardless of their color. They do it at an unexpected time, so you cannot predict what stage they will turn black.

To ensure that your axolotl is a black melanoid, you can check the pupil of its eye if it has a shiny ring around it and no signs of bright colored spots anywhere in the body. You can also place it over a black bottom and observe if it turns black within an hour.

Heavily-marked melanoid. These are strikingly noticeable or conspicuous and known to be beautifully marked melanoids. In some instance, there is a fascinating heavily marked melanoids. Axolotls can appear to be lighter in color and appearance. Both parents are black melanoid. It is just that camera flash makes it look washed out of the black and dark green patches. Some people believe that black melanoids are not necessarily uniform black. They only have dark dots, which is hard to recognize when an axolotl is in deep black. Most of it gets patches of brown, green, or gray. Melanoids is not always all black, but it has no iridophores or shiny patches.

Heavily-marked melanoids are a rare variation of the black melanoid morph. They have the same black and purplish-gray spots of black melanoids but have light green and yellow patches. An interesting thing to know about a morph is that it is only visible in few times. These color morphs are unique. You cannot predict if the two melanoid parents will produce heavily-marked offspring because they came out naturally. Some are more heavily marked. Then others and can even end up with solid-colored masks.

Axolotls stay young forever, and we love to see someone who grows alongside us. They look young for the rest of their lives, but that does not meet they will live forever. When we wanted to adopt a pet, we always check first its cost. Before buying in a local pet store, it is essential to research the pet and their needs to live a healthy lifestyle. Since axolotls are somehow rare and unique in their way, expect them to be pricier than the usual pets that we see anywhere. It is not a typical creature to handle, and it requires a deeper understanding of their nature and background.

The average cost of axolotls is from $20 to $70. However, it depends on the age. Babies and juveniles are around $20 to $35. They are still delicately sensitive and need special care. They are offered at a smaller price because you have hands-on responsibilities. Adults are sold at $65 to $70 because they are not that fragile anymore. There is not much for you to worry about because they know what is best for themselves.

One of the factors that affect the cost is the axolotls color or morph. If you are buying Melanoid Axolotls, you have to identify them as very dark, and their eyes don’t have that shiny ring around the pupil. They are about $40 in 4/4.5 inches. Melanoid Axolotls are available in some pet stores or online shops such as Axolotl Factory, Underground Reptiles, Backwater Reptiles, ReptilesNCritters, and Western Axolotl.  They are the few most trusted online shops accredited and noticed by the experts in the field. You can check first if your country is eligible to adopt an axolotl.

Still, it is recommended to avoid animals from the wild and only buy axolotls that have been born and raised in captivity. It will be beneficial for both melanoid axolotls and you because they are captive-bred animals that are usually free of diseases.

This axolotl is an assortment of brown, black, and green. They have speckles of bright and gold iridophores pigments. The color may vary in lighter or darker. It is known as wildtype because its color is the natural color that we can see in the wild.

The leucistic axolotl is pink or white. It has black eyes and sometimes dark spots in the face and upper back. They are not albinos because they have very dark brown or black eyes and freckles of black pigment. It is darker than others. Most leucistic have dark coloring in the face while others in the crest of their back. It is not the same as a piebald. Their gills are dark red or deep pink, and they can develop specs or freckles on their body, but it depends on the environment in which they live.

It is white with pinkish or reddish pale eyes. They don’t have enough color pigment across their body, but their gills are pink because they are clear, and the blood-flows are visible. Inactive albino’s gills look slightly white. They are different from leucistic in terms of genotype and eyes.

Due to the lack of melanophores, this gives it a gold appearance. It has no black eyes because of albinism. Their eyes are just pale, either yellow or red. Sometimes it is hard to see. They are lighter and more vibrant yellow when they are younger. They become less vibrant yellow as they age. The yellow tinge may vary, and some golden albinos can be pale compared to others.

This axolotl looks close enough with wildtype, but there are significant differences. A melanoid is abundant in melanophores. They have dark pigment and a lack of shiny pigments. It only means that they don’t have golden flecks through their body like wildtype. If you shine a light in their eyes, they do not have a reflective ring in them. Plus, melanoid look darker than wildtypes.

It is not a specific color because many of the colors of axolotls can contain the GFP. It is a mutation in the axolotl’s DNA that allows them to grow light green under UV light. They have lesser skin pigmentation axolotls have.

In Australia and Germany, coppers are more popular. Their genetic details are still unknown. If you are getting one for breeding purposes, you can have a hard time figuring it out. Copper is an albino that has red-tinted eyes and capable of laying white eggs. They are often light brownish, pinkish color with dark brown spots. Coppers don’t have any black pigments.

When an axolotl pigmentation goes all down the body and sides, not just along with the head and top, it is called piebald. It is sometimes identified as leucistic, and sometimes it is not usually a fact. A piebald is typically darker and thicker in black spots than a noticeable leucistic. Piebald is genetically inheritable compared to mosaicism and chimerism. It is a genetic issue that occurs while forming.

Chimera is a rare color of the axolotl. This color is the form of two eggs combined, and one side of the axolotl is from one egg while the other side is from the other. It is a color that cannot be paired by some breeding. It is only by an accidental fusing of eggs during development.

Mosaicism is the result of two cells forming in the development. Breeding cannot guarantee to reproduce. Some mosaics are infertile as they are combining two cells. However, this one is a male, but eggs contribute to having a low success rate.

If you love our content, we invite you to follow us on our social media outlets for more updates!