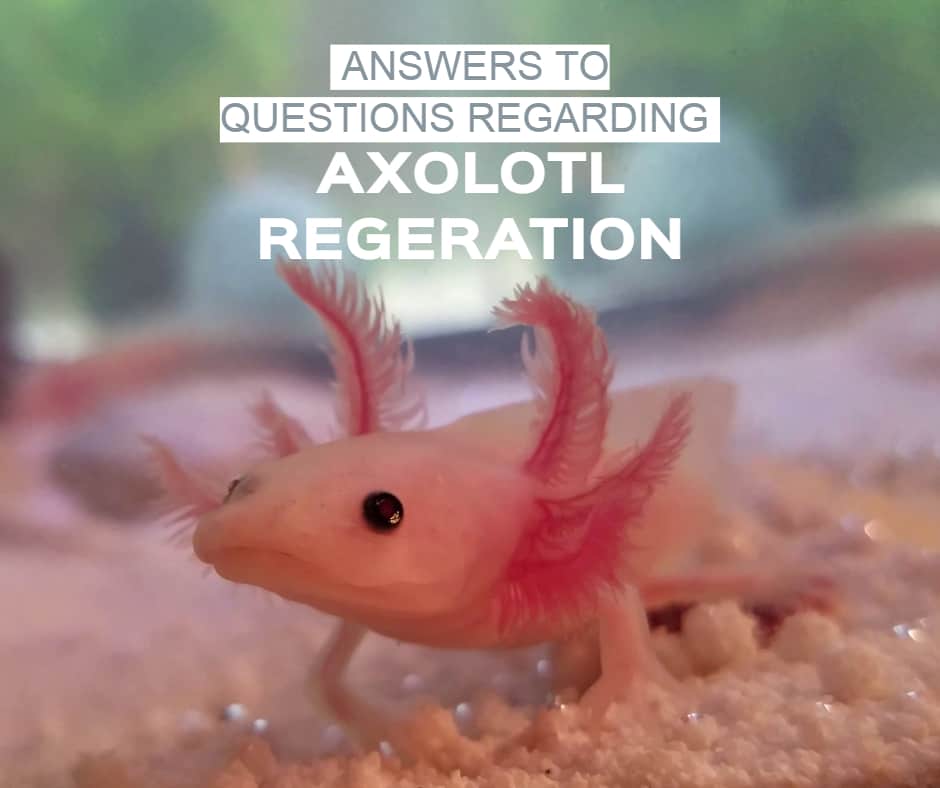 Regeneration is an essential part of an axolotl’s life. The ability to replace old and damaged cells in all organ systems is vital for tissue homeostasis and survival of their body. This enables them to repair body tissues when injuries occur. In fact, the capacity to regenerate more complex structures, such as limbs, is highly variable among Tetrapod species. However, axolotl regeneration is one of the most fascinating phenomenon that could happen among other aquatic creatures.

An axolotl is an amphibian that can regenerate its multiple body parts. It includes the limbs and internal organs such as the brain, heart, and lungs. Scientists have discovered that axolotl has a remarkably complicated genome with 32 billion base pairs. This is more than ten times than what humans have. The comprehensive formation of DNA helps scientists understand how axolotls can recreate a perfect replica of nearly every part of their body.

How Do Axolotls Regenerate?

When a member of an axolotl’s body is severed, the site of the wound bleeds very little and heals in a few hours. A sore epidermis consists of cells that function to cover the injury demonstrate the regeneration capability of an axolotl.

Axolotl’s process of limb regeneration has extensively observed the regenerative process. The axolotl is capable of regenerating full limbs regardless of the damage of injury along the limb axis. Regenerating begins with injuries. Not all injuries like a side injury to the limb result in the formation of regenerating limb. As axolotl ages, the time increases when a sore epithelium migrates and covers the sore.

Within the following days, the nerve fibers render a wound epithelium and indicate feedback loops between the nerve and wound epithelium implement a specialized signaling center known as the apical epithelial cap. The center generates multiple molecules that lead to differentiation and proliferation of the tissues of the underlying mature limbs within the progenitor cells of the members known as cells. The wound between cells and opposite axes of the limb builds a pattern of the missing limb structures. If already established, the cells differentiate between the formation of the missing limb.

How long does it take an axolotl to regenerate?

Axolotls take time to regenerate.  In general, smaller axolotls can regenerate faster than terrestrial axolotls. A juvenile axolotl can regenerate in approximately 40 to 50 days, while terrestrial forms take much longer. They don’t have any marks when they get their wounds healed. However, you can notice through their movements that something is not the same after the whole process.

In McCusker C. Gardiner’s study, it was stated that while tissue regeneration occurs in all adult tetrapod, the ability to regenerate complex structures like limbs is limited to urodeles. The remarkable regeneration abilities of salamanders demonstrate what we can reasonably expect to improve our regeneration potential.

The axolotl research allows the understanding of the behavior of their cells through the outcome of a controlled growth pattern formation. It leads to regeneration instead of aging or cancer.

The overview of the study is an essential aspect of regenerating biology on the Mexican Axolotl. These aquatic creatures have served as a model to identify pathways and factors relevant to limb regeneration.

Axolotls are faster than any animals when it comes to wound closure. They only take few hours to cover a wound with a migrating sheet of the epidermis. Humans cover injuries by the proliferation of new epidermal cells, and this process can take days, if not weeks, depending on the size of the wound.

Although we have known about their regenerative potential for over 200 years, we still have a little understanding of the mechanisms underlying this realization of adult axolotls’ tissues. In humans, the epithelialization of a 2 x 2 cm thick split wound is significantly slower in older people 65 years old and above than in young people 18 to 55 years old. Experts have the same discoveries performed in the axolotl. Anecdotal on different sizes and ages of axolotls specify that wound epithelium patterns are slower in larger animals. The large difference in injury size in these animals is likely a partial factor in this disparity.

What body parts can an Axolotl regenerate?

Axolotls are not the only animal in animalandia that has the power to regenerate. However, axolotls are the only vertebrate that can regenerate multiple body parts throughout their life. Regeneration is like a superpower for animals. It gives them a chance to heal themselves and get back to their natural habitat like a new one. They can regrow organs that are robust as the original one no matter how old they get.

Axolotls can regenerate their limbs. It undergoes a process following an injury to regenerate the damaged appendage. The bone, cartilage, muscles, and skin are still regenerated no matter how many times they are affected. The good thing about it is, it shows no sign of trauma.

Surprisingly, axolotls can regenerate other internal organs such as the heart, brain, ovary, spinal cord, and lungs.

Can an axolotl regrow its head?

The answer to this is, no. Unfortunately, axolotls cannot regrow their head. The brain controls the regeneration process through the nervous system. When something happens to their head, the brain is the most affected one. It will not be able to communicate with other organs, and generation will never happen.

Axolotls’ capability to regenerate means they have stable cells which other animals don’t have. Since axolotls can regenerate multiple parts of their body like internal organs, people would ask if axolotls can also regrow its head? If they have scars on their heads, they can recover quickly.

When that happens, severely damaged brain and nervous system will no longer function, and worst, axolotls may even die because of their head.

Axolotl’s regeneration executes in unbelievable ways. They react to wounds in a different way than ours. Axolotls begin to transform their cells into stem cells during regeneration.

After an Axolotl loses its limb, the first thing that happens is that the clot of blood cells stops the bleeding. What follows is a rapid division of cells that slowly turn into stem cells and form blastema. Stem cells essentially don’t have any identity in the body, and they can become whatever they want.

Cells in blastema are not stem cells, but they are very similar. They have reused cells from various parts of the Axolotl body. They found out that the quality and functionality of the new member starts to worsen the fifth time. It begins to lose its regenerating capability and generates scar tissue instead. Axolotl’s regenerative abilities focused on the function of stem cells and an unknown method.  It brings the cells back to the site of the stem cell damage.

If you love Pets Checklist’s content, we invite you to follow us on our social media outlets for more updates!